The $682.4 million total does not include the amount Bonneville borrowed from the U.S. Treasury in 2013 totaling $52.1 million for program-related projects, and $103.6 million for associated federal projects, which include capital investments at dams operated by the Corps of Engineers and Bureau of Reclamation.ii These investments are funded by congressional appropriations and repaid by Bonneville. Including them in the same total as fixed costs would double-count some of the capital investment. The total also does not reflect a credit of $84.1 million from the federal Treasury related to fish and wildlife costs in 2013 that Bonneville is required to take under Section 4(h)(10)(C) of the Power Act. The annual credit comprises the obligations of other federal agencies for dam purposes other than hydropower, and which Bonneville pays in full. The credit is applied to Bonneville’s federal Treasury debt. Subtracting the credit reduces the total fish and wildlife costs to $598.3 million in fiscal year 2013 (the credit is explained in more detail in the “Power System Costs” section of this report).

The total of all fish and wildlife costs reported by Bonneville in Fiscal Year 2013 ($682.4 million) includes forgone revenue and power purchases. How large is this relative to Bonneville’s other costs? In the same year, Bonneville’s entire Power Business Line costs totaled approximately $2,647,340,000 (See Figure and Table 1D). Adding the forgone revenue ($135.5 million) to these costs brings the total to $2,782,840,000. Bonneville’s fish and wildlife costs comprised 24.5 percent of that total.

(Public comments were accepted on the draft report through July 11, 2014.) 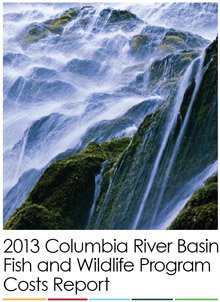