Beacon Rock, on the north shore of the Columbia River 35 miles east of Vancouver, Washington, is the core of an ancient volcano. Floods that surged through the Columbia River Gorge at the end of the last ice age eroded the sides away, leaving the basalt core. The top of the rock is about 845 feet above the river.

Lewis and Clark named Beacon Rock on October 31, 1805, on their westward journey to the Pacific. It was in this area that the explorers first observed and measured tidal influences in the river.

In 1811, Alexander Ross of the Astor expedition called the rock Inoshoack Castle, and for years it was known as Castle Rock, despite an 1853 donation land claim and later city of the same name on the Cowlitz River. In 1916, the U.S. Board of Geographic names restored the name Beacon Rock.

Ownership of Beacon Rock passed to the Northern Pacific Railroad, and in the 1880s the railroad planned to blast it and crush the rock into ballast — the rock that underlies railroad tracks. Learning this, Henry J. Biddle, a Portland and Vancouver businessman, bought the rock in order to preserve it from destruction. In 1915-18, Biddle built a trail to the top. He died in 1928, and in 1935 his heirs donated the rock to the state of Washington as a park.

Today, Beacon Rock State Park encompasses 4,650 acres, including camping sites and 9,500 feet of shoreline along the Columbia. The trail to the top is well-marked and includes safety rails. Use of the trail is free. 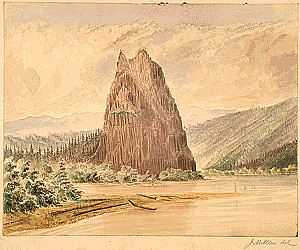 Painting of Beacon Rock made sometime between 1857 and 1862 during a government survey following agreement on the border between Canada and the U.S. Photo: National Archives Catalog. 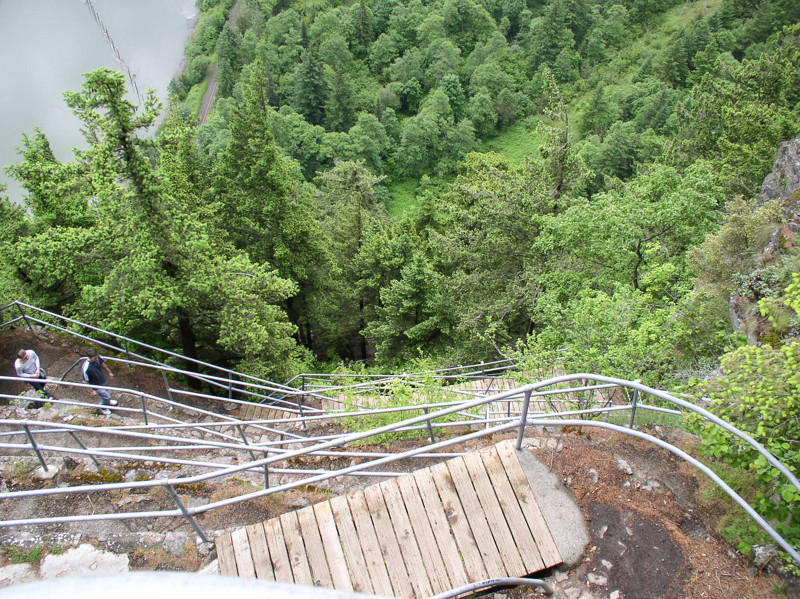 The trail to the top is easy, thanks to dozens of switchbacks. Photo: John Harrison