It is impossible to miss the importance of beavers in the history of the Columbia River. The principal object of land-based fur traders in the Northwest of the 1800s, beavers were plentiful, easily trapped and valuable. Their thick, water-resilient fur was transported across country to Canada and New England for manufacture into coats, shawls, blankets, and hats, and traded in China for tea and spices.

Beavers also were an important commodity to Indians of the Columbia River Basin, who used the fur in clothing and also extracted the animal’s musk gland, which was considered an aphrodisiac and love charm. Beavers were more important to Indians of the colder, forested uplands of the basin than to those in the milder climate of the lower basin close to the ocean.

Beavers also provided an important function in creating and maintaining spawning and rearing habitat for fish, particularly salmon and steelhead, by creating pools that keep water clean by storing organic material and sediment. The dams also moderate periodic fluctuations in flows and allow for stable growth of important shoreline vegetation, which shades the water and provides cover for juvenile fish to hide under and insects for the fish to eat. In fact, deliberate overhunting of beavers contributed to the degradation of salmon habitat throughout the Columbia Basin in the 1830s and 1840s. This was the first major human-caused impact on salmon and the beginning of their 150-year decline.

Beavers in the Columbia River Basin, or more precisely access to beavers, played an important economic role in the political conflict between the United States and Great Britain over possession of the Columbia River country. Upon his return to St Louis from the Pacific, Meriwether Lewis wrote to Thomas Jefferson about the fabulous commercial opportunities awaiting entrepreneurs in the Northwest. In the letter, dated September 23, 1806, Lewis wrote that the Missouri River Basin and the Rocky Mountains were richer in beavers and otters than any country on Earth. He wrote that furs could be collected east of the Rockies, and in the Columbia basin west of the Rockies, and taken overland to the mouth of the Columbia for shipment to buyers in Canton.

Jefferson had ordered Lewis and Clark to examine the Missouri River country for a practicable water route to the Pacific. Lewis reported that while a water route was not feasible, nonetheless there were great opportunities in the fur trade. He theorized that if the furs reached the mouth of the Columbia by August 1 each year, they could be sold in Canton sooner than furs that the British shipped there each year via Montreal and London. The Columbia River route thus was advantageous to America, he wrote.

Others also understood the potential of a fur trade based on the Columbia River. New York financier John Jacob Astor sent two expeditions to the mouth of the Columbia in 1810, one by land and one by sea, where employees of his Pacific Fur Company established a trading post in 1811 and called it Astoria. Soon after, David Thompson of the North West Company arrived at Astoria, also seeking a water route to the Pacific for the inland fur trade, and soon the Canadian company purchased Astor’s fort and the Northwest assets of the Pacific Fur Company. Later, the Northwest Company merged with the Hudson's Bay Company, and the resulting business, based at Fort Vancouver, grew to be the major economic force in the Pacific Northwest. It was a business based initially and primarily on beaver furs.

Around 1820, shortly after the 1818 agreement between the United States and Great Britain that secured joint occupancy of the Northwest for a period of 10 years, the Hudson’s Bay Company began to implement a policy to strengthen its economic power in the Northwest by exterminating fur-bearing animals, particularly beaver, south and east of the Columbia River. “It was a conscious policy of destruction designed to forestall U.S. competition,” historian Robert Bunting wrote.

Why? To the British, it seemed obvious that after 1828, when the joint-occupancy agreement was set to expire, the two countries would agree on the Columbia River as the international boundary. So it made sense to deprive the rival American fur companies of an economic resource. By creating what Bunting calls a “a fur desert” around the boundaries of the British Northwest, the company hoped to keep the Americans out.

In 1825, the company ordered its Columbia Department to concentrate its fur trapping south of the Columbia River. This new policy had the desired effect. That same year, botanist David Douglas noted the scarcity of beavers in an area of the Willamette Valley where they once had been numerous.

It would turn out that the company guessed wrong about the joint occupancy agreement. In 1827 it was renewed for 10 years, and when that period expired it was renewed for another 10; the border issue would not be resolved until 1846. The company also guessed wrong about the future importance of beaver skins, at least as a material for hats. In 1825, the same year the company dedicated Fort Vancouver, the Florentine silk hat was introduced in Paris, the world’s fashion capital. It was, as author Stewart Holbrook has described it, a sensation. Soon, the beaver hat, for which so many beavers had been trapped in the Columbia River Basin, began a steady decline in popularity.

The Hudson’s Bay Company recognized the trend and began shifting the company’s Northwest commerce from furs to salmon and timber, and to agricultural exports, and also to operating supply stations along the Oregon Trail at Fort Boise and Fort Hall in present-day Idaho.

The policy of extermination, meanwhile, was effective. Between 1826 and 1834, Hudson’s Bay Company trappers working out of Fort Colville, near the confluence of the Colville and Columbia rivers in present-day northeastern Washington, killed an average of 3,000 beavers per year, but by 1850 only 438 were killed. Americans took over where the British left off, in a sense. By 1843, the fur trade was centered at British posts on Vancouver Island, but American trappers flooded into the Columbia Basin and continued intensive trapping of the animals. By 1900 beavers were nearly extinct.

Hydroelectric dams caused another assault on beaver habitat, though not as destructive as the intensive hunting of the 19th century. The huge dams on the mainstem Columbia and Snake rivers were not critical in the loss of beaver habitat, but dams on the smaller tributaries took a toll. Dams inundated shoreline areas, created large, quiet lakes where rivers once flowed and generally altered the ecology of beaver habitat. Beaver habitat losses were particularly acute in Oregon’s Willamette River tributaries such as the Santiam River, where federal hydroelectric dams were built. More than 4,400 beaver “habitat units” were lost. One habitat unit supports one animal; for beavers, a habitat unit varies in size depending on the quality of the habitat.

Thanks to mitigation efforts, beaver populations are rebounding. Beaver ponds provide rearing habitat for some species of salmon, and the ponds also help regulate floods, flows and the distribution of nutrients in streams, just as they did before the 19th century British and American trappers began large-scale harvesting of the animals. 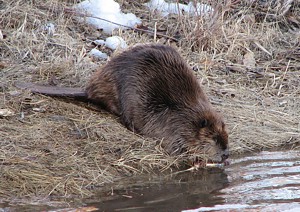