From humble beginnings, salmon canning grew to become the major industry of the Columbia River and then, with the decline of salmon and steelhead, fell into near oblivion, all in the space of 114 years. At the industry’s peak, in the 1880s, there were 39 canneries on the Columbia River. But as the supply of salmon steadily declined, so did the number of canneries. The last one closed in 1980.

Brothers George W. and William Hume brought salmon canning to the Columbia River. Disappointed by the steadily decreasing salmon runs in California’s Sacramento River, where they established the first salmon cannery in North America on a river barge in 1864, the Hume brothers and their partner Andrew S. Hapgood moved their business to the Columbia River in 1866 and located at a place they called Eagle Cliff on the Washington side of the river 50 miles inland from the ocean. The site was in present-day Wahkiakum County. That year they packed 4,000 cases of salmon, 48 one-pound cans to the case, by hand.

There were four Hume brothers, and each of them — Robert, George, Joseph, and William — ultimately had their own canneries, although Robert would leave the Columbia in 1877 to establish a cannery on the Rogue River in southern Oregon because, it was said, he believed the Columbia was being fished out. Between 1866 and 1870, Columbia River canneries packed an average of 60,000 cases of salmon (48 pounds per case) per year, primarily Chinook.

In 1872, R.D. Hume was operating several canneries on the lower river. To lower his production costs, he brought workers from China. He was the first to employ Chinese workers in American canneries. Hume preferred Chinese workers because they were efficient and hard-working and would accept low pay. Most of the fishing for the canneries was done by local Indians. The Chinese were not allowed to fish.

In 1889, with the Chinook runs declining, canneries on the lower Columbia began processing sockeye salmon and steelhead. A few years later, the canneries added coho and chum salmon. All of these were considered inferior to spring Chinook, but demand for canned salmon was high. Between 1891 and 1895, Columbia River salmon canneries packed an average of 486,000 cases (48 one-pound cans per case) each year, and between 1889 and 1920, the average annual harvest of Chinook salmon from the lower Columbia River was 25 million pounds.

At the same time, however, the number of adult fish returning to spawn in the upper Columbia River declined significantly, particularly spring Chinook populations. The decline resulted primarily from overfishing in the lower river, where most of the canneries were located. With the spring salmon run declining, lower river harvest focused increasingly on fall Chinook, which the canners also considered inferior to spring Chinook. Other impacts were at work against the salmon. Water diversions for irrigation, and siltation and pollution of spawning streams caused by mining, grazing and timber harvest, rapidly degraded the quality of spring Chinook spawning habitat. Facing this decline, salmon harvest managers in Washington and Oregon promoted increased hatchery production, believing that hatchery production of fish would overcome declines caused by overfishing and habitat destruction.

Demand for canned salmon was high during World War I, and demand remained stable through the 1920s when canned salmon was a staple food in many households, easily acquired and prepared. Through the 1930s and ‘40s, however, the supply declined and the output of Columbia River salmon canneries declined, too, dropping to an annual average production of 304,000 cases between 1941 and 1945. With the shrinking supply came higher prices, and soon salmon was more of a restaurant item than a staple of the family table.

The declining fishery meant that fewer and fewer fishers entered the business or stayed in it, and even though fishery regulations were changed and hatchery practices were improved in efforts to protect and produce more fish, the Columbia River canning industry, like the fishing industry, could not sustain itself. Many fishers began working part of the year in Alaska, where the fishing and processing industries remained strong.

With the advantage of hindsight, it is clear that after the 1920s, the fish production and processing industries on the Columbia declined steadily. There was no single cause, but habitat destruction, overfishing, and changes in consumer preferences all played a part. The salmon resource always had been limited, even though the numbers of fish at times seemed limitless. Anthropologist Courtland Smith writes in Salmon Fishers of the Columbia that the salmon industry declined because people came to rely on other resources, and salmon no longer met the basic food needs of industrial workers. Increasingly, salmon were fished more for fun than for food.

The last major cannery on the Columbia, the Bumble Bee facility at Astoria, closed in 1980. Since then, a few small canning operations have started up, but the pack is small, specialized and expensive compared to the output of the industry that once was the primary economic engine of the lower Columbia. 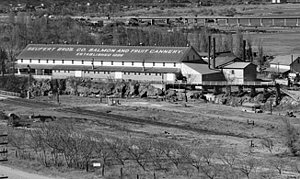 While most canneries were clustered near Astoria, the Seufert Brothers’ cannery took advantage of the abundant salmon runs near The Dalles and Celilo Falls. Photo: Historic Photo Archive. 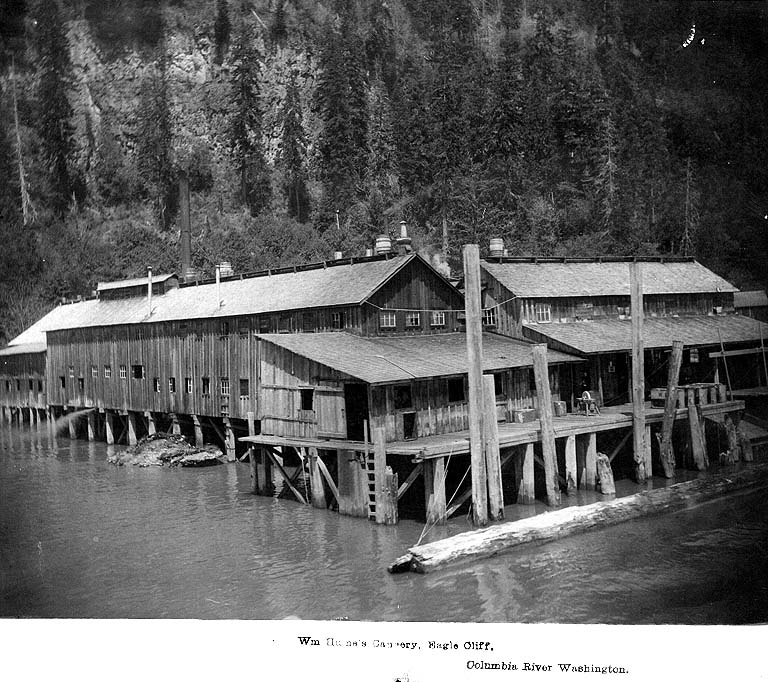 Site of the first salmon cannery established in the Pacific Northwest in 1865 by William Hume. Photo: University of Washington.

A Columbia River salmon canned and sealed in a tin made to fit (Pacific Fisherman, June 1929, p.30). Photo: University of Washington.