The federal government began constructing locks at the Cascades to facilitate river traffic in 1878; the locks were completed in 1896. The city that grew up around the locks was named for them. The rapids and most of the locks were flooded in 1938 when water rose behind Bonneville Dam about five miles downstream, but the town sits on a bluff above the river and was not affected.

Today the Bridge of the Gods crosses the river at the western edge of Cascade Locks. The bridge is owned and operated by the Port of Cascade Locks, which also operates a riverfront park just east of the central business area of the city. The park is adjacent to a concrete channel along the river shore, a remnant of the locks. The channel is a popular fishing site for sturgeon and, for Indians, salmon and steelhead. The park also includes a fine museum dedicated to the history of the locks and Columbia River steamboats. 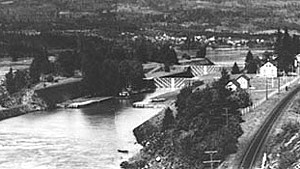