The strategic location of the Columbia River, which has the largest deep-water estuary between San Francisco Bay and Puget Sound, long has been recognized by those who sought to colonize it. Employees of New York merchant John Jacob Astor founded Astoria as a hub in a fur trade that Astor hoped to establish from the Rocky Mountains to the Pacific Coast to China. Canadian fur trader David Thompson also recognized the mouth of the Columbia as an important station for the fur trade, as did Robert Gray and members of his crew, and Lewis and Clark. President  James Monroe, in his last address to Congress in 1824, said a military post at the mouth of the Columbia “would afford protection to every interest, and have a tendency to conciliate the tribes of the Northwest with whom our trade is extensive.” President John Quincy Adams, in his first message to Congress in December 1825, said “the River of the West, first fully discovered and navigated by a countryman of our own, still bears the name of the ship in which he ascended its waters, and claims the protection of our armed national flag at its mouth.”

The lower Columbia was an important commercial center for exports of lumber and canned salmon through the middle and late 1800s, and the importance of the river grew over time as cities as far inland as Vancouver, Washington, 100 miles from the ocean, developed deepwater sea ports. The river also long has had military importance, as well. If an enemy decided to attack by sea, the river provided a logical entrance to an important part of the West Coast. For that reason, three military posts were built in the estuary in the 1800s — one on either side of the mouth of the river and the other about a dozen miles inland on the Washington shore.

The two at the river mouth are the oldest, their construction dating to the Civil War and before. The site of Fort Stevens, located at Point Adams on the southern, or Oregon, shore of the river mouth was established by executive order of President Millard Fillmore in 1850. Construction of the fort began in 1863 and was completed in 1865. It was named in honor of General Isaac I. Stevens, the first territorial governor Washington, who died in Virginia at the Battle of Chantilly in 1862. Coastal defense was important during the Civil War, as the Confederate ship Alabama prowled the north Pacific firing on whaling vessels and sinking many of them. On the north, or Washington, shore, a lighthouse was constructed at Cape Disappointment in 1856. It remains the oldest functioning lighthouse on the West Coast. In 1862, cannons were installed at the lighthouse. The site was expanded in 1875 and named Fort Canby after General Edward Canby, who was killed in the Modoc Indian War in southern Oregon and northern California in 1872-73. The fort continued to be improved until the end of World War II. Gun batteries remain at the park.

A line of guns was constructed at Fort Stevens in the mid-1890s. The fort was updated to include modern six-inch guns during World War II. On June 20, 1942, a Japanese submarine fired several shells at the fort, making it the first military post in the lower 48 states to be attacked by an enemy since 1814.

Fort Stevens closed as a military post in 1947; the buildings were sold to private owners. In the 1950s, the state of Oregon acquired the remainder of the property and established Fort Stevens State Park. Access to the park and its campground and historical area is from Hammond, Oregon, west of Astoria.

Directly across the mouth of the Columbia from Fort Stevens was Fort Canby at Cape Disappointment, Washington. Fort Canby was completed in 1863 and eventually named for General Edward R.S. Canby, who was killed in a battle with Modoc Indians in northern California in 1873. Batteries from the old fort remain, but the guns have been removed.

It was at Cape Disappointment in 1805 that William Clark, his slave York and 10 other members of the expedition first saw the Pacific Ocean. Clark commented in his journal that the “men appear much satisfied with their trip beholding with astonishment the high waves dashing against the rock and this ‘emence Ocian’.”

Like Fort Stevens, Fort Canby was closed in 1947 and today is a state park. It includes two boat ramps, a camping area and hiking trails.

Fort Columbia is the newest of the Columbia River coastal defense forts. It was constructed between 1896 and 1904 to protect the estuary and harbor. Like the others, it was closed in 1947 and today is a state park. The fort is constructed on a promontory called Chinook Point, which is a short distance east of the Astoria/Megler Bridge, and has an unobstructed view of the river. Twelve historic buildings still stand on the site, which includes picnic areas and trails.

In addition to the guns at the forts, which could fire 10 miles or farther, other defense works were installed at the mouth of the Columbia, as well. Bright lights were installed at Cape Disappointment to illuminate the mouth of the river, if necessary, and during World War II the entrance to the river was mined. The mines, four feet in diameter, were anchored to the bottom of the river and wired together so they could be detonated electronically or by trip wire. Friendly vessels were advised by radio how to find the safe, mine-free channel. The mines never were used. Some were removed after the war and others simply silted over as the river bottom shifted. The Army assumes the mines were saturated with water over time and rendered harmless. 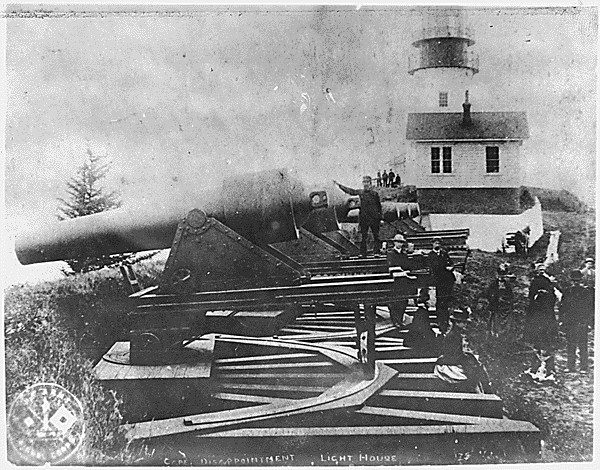