The Columbia River begins at this lake approximately 55 miles (77 kilometers) north of Cranbrook, British Columbia, and immediately north of the town of Canal Flats (map). Between Canal Flats and Fairmount Hot Springs, Provincial Highway 93 and the Canadian Pacific Railway tracks follow the western shore of the lake, which is situated in a north-south direction between the Selkirk Mountains to the west and the Rockies to the east. According to the BC Geographical Names Office, the precise coordinates of this headwaters lake of the Columbia River are 50°13’00” north latitude, 115°51’00” west longitude. The elevation is approximately 2,656 feet above sea level. The lake is about nine miles long and 6,815 acres (2,758 hectares) in size.

The explorer and fur trader David Thompson is credited with being the first European to see the lake, in 1807. He was taken by its scenic beauty and wrote in his journal:

I could never pass this singular place without admiring its situation and romantic bold scenery ... other rivers have their sources so ramified in rills and brooks that it is not easy to determine the parent stream, this is not the case with the Columbia River, near the foot of a steep secondary mountain, surrounded by a fine grassy plain, lies its source, in a fine lake of about eleven square miles of area, from which issues its wild rapid stream, yet navigable to the sea, its descent is great.

One of the next Europeans to record his observations about the lake was the Jesuit missionary Pierre-Jean de Smet, who founded the St. Mary’s mission in 1841 near present-day Missoula, Montana, about 300 miles to the south. In 1845, on one of his frequent journeys around the inland Northwest, DeSmet camped at the northern end of Columbia Lake near the Hoodoos, an unusual sandstone formation more than 100 feet tall that looks like columns and ramparts eroded into the hillside. In a letter dated Sept. 9, 1845, DeSmet wrote that the lake was in the “rugged and gigantic mountains where the Great River escapes.” He was captivated by the Hoodoos, which must have looked much the same then as they do today, for his comment remains accurate: “…by borrowing ever so little the aid of the imagination, we behold rising before our astonished eyes, castles of by-gone chivalry, with their many-embattled towers…”

DeSmet described “swarms of aquatic birds” on Columbia Lake and “…shoals of salmon in a state of exhaustion” spawned-out along the shore. Downstream, where the Columbia flows into Lake Windermere, de Smet saw:

…in a rather shallow place, [the salmon] pass in great numbers, cut and mutilated, after their long watery pilgrimage among the rapids, cataracts, valleys and falls; they continue this uninterrupted procession during weeks and months.

He noted that the fish would fight each other over spawning sites and mates along the shores, where the two lakes “form an immense tomb, for they there die in such numbers as frequently to infect the whole surrounding atmosphere.” Bears, wolves, eagles and vultures all fished for the spent salmon, he wrote.

DeSmet’s observations of prolific salmon, and the wildlife that fed on the spawners, were similar to those of William Baillie-Grohman, the visionary English businessman and adventurer who built a canal linking the Kootenay River to Columbia Lake. Writing in 1907, he commented:

Forty years ago the number of fish who reach these beds was so great that the receding waters would leave millions of dead salmon along the banks, emitting a stench that could be smelt miles off, and which never failed to attract a great number of bears.

Grand Coulee Dam ended the salmon runs to the headwaters. Today there are small provincial parks at the north and south ends of the lake, and a few homes along the shoreline. The highway is the major north-south link through the area, and there is heavy seasonal tourist traffic to the golf courses and ski resorts between Fairmont Hot Springs, near the northern end of Columbia Lake, and Invermere at the northern end of Lake Windermere.

And there is an irony here, too. Between Columbia and Windermere lakes, the nascent river follows a sinuous course, flat and deep in some places, its shoreline rich with cattails and aquatic grasses, shallow and noisy in other places. Highway 93 passes over the river just west of the Fairmont Hot Springs Resort. The 183-meter 13th hole of the resort’s golf course is adjacent to the north side of the highway. The tee is on the east side of the river, and the green is on the west. Here, then, in literally the moment of its birth, the mighty Columbia River is a but a humble water hazard. 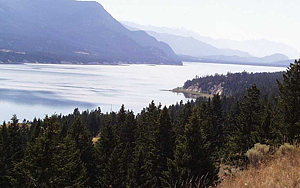 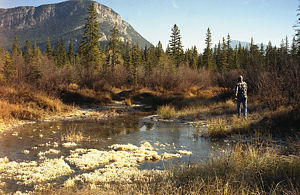 The source of the Columbia River. Water from this spring, and other smaller ones nearby, flows into the head of Columbia Lake. Photo: Bob Jamison.