The Historic Columbia River Highway once ran along the south side of the river between Troutdale, 14 miles east of Portland, and The Dalles, a distance of 74 miles. Over time, portions were demolished to make way for the modern-day Interstate 84 freeway, but some stretches of the historic highway remain open for vehicle traffic.  Other portions no longer are accessible to vehicles but are open for hiking and bicycling.

The scenic highway was the idea of two visionaries, entrepreneur and good-roads promoter Sam Hill, whose business interests included a telephone company in Portland and a gas utility in Seattle (Hill built Maryhill, today a museum, in the eastern end of the Gorge), and his friend Samuel Lancaster, an engineer. Lancaster designed the highway to take careful and dramatic advantage of the scenery and vistas, modeling the road after the Auxenstrasse in Switzerland. Like the scenic highway, the Auxenstrasse features stonework cliffside bridges and dramatic tunnels with windows cut in them. Lancaster brought stone masons from Europe to build the scenic highway bridges, many of which still stand.

Parts of the Historic Columbia River Highway were demolished during construction of Interstate 84, but about 40 miles remain drivable today, including a stretch of about 15 miles between Troutdale to Dodson in the heart of the Gorge that passes Crown Point and many beautiful waterfalls including Latourell, Coopey, Mist, Wahkeena, Multnomah, Oneonta and Horsetail falls. Access points to the old highway are clearly marked along the freeway.

Another 15 miles are closed to motorized vehicles but open to the public as trails. Notable among these trails is the five-mile stretch between Bonneville Dam and Cascade Locks, and another five miles between Hood River and Mosier. In both cases, the wide asphalt path follows the route of the historic highway. Between Hood River and Mosier the trail includes one of the remarkable tunnels of the old highway, this one about 400-feet long through solid basalt. Like motorists of the 1920s, hikers and bicyclists today can stand in windows that were carved in the tunnel to enjoy the stunning view of the river several hundred feet below. 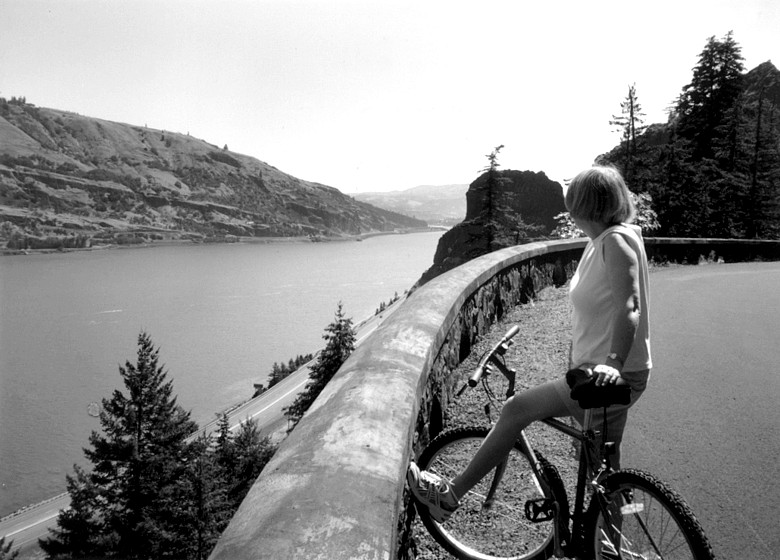 Between Hood River and The Dalles, the route of the old highway today is a path for riders, walkers and runners. Photo: John Harrison.