During the last ice age, between 12,800 and 15,000 years ago, a glacier moved down the present-day Okanagon River valley of north central Washington and blocked the Columbia River. The river rose behind the ice dam, eventually spilled over the lowest point in its south canyon wall and, over time, carved a 30-mile long canyon that ended at a broad ledge of basalt. Here the river tumbled over a precipice higher than Niagara Falls and with a volume of water many times greater than the New York river. From the falls, the Columbia flowed south through a smaller canyon and then spread out across the plains, ultimately rejoining its channel and flowing on to the Pacific.

When the ice dam receded north up the Okanagon canyon, the Columbia returned to its pre-ice dam channel. The deep, steep-walled temporary channel across the Columbia Plateau is known today as the Grand Coulee, and the former waterfall as Dry Falls. It is located south of Banks Lake and west of Coulee City along Washington Highway 17. Dry Falls State Park is a popular camping, hiking and fishing area. 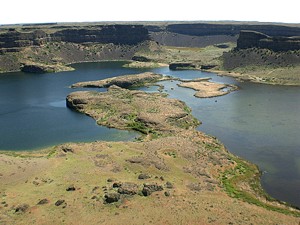