Moving fish safely past the big dams on the lower Snake and Columbia rivers is one of the most difficult and controversial challenges the dam operators face. It is a problem that vexed dam planners and operators ever since the first dams were built in the 1930s — in fact, even before they were built. In the late 1930s as Bonneville Dam was being constructed, the U.S. Army Corps of Engineers fretted over how to safely pass migrating fish both upstream and downstream at the dam.

The challenge for dam operators, then and today, is to get as many fish past the dams safely as possible. Fish ladders are effective for passing adult fish, but juvenile fish passage is more problematic. There are four ways juvenile fish can pass a hydroelectric dam. First, and least desirable, fish can be swept through turbines. This is the most lethal passage alternative. Second, fish bypass systems can channel some fish away from the turbines into a series of pipes and channels that carry the fish through the dam and deposit them on the downstream side. Third, the spill gates can be opened, creating a waterfall for the fish. Or fourth, the fish can be collected and transported downstream in barges or tank trucks operated by the Corps of Engineers.

Each of these has problems. Not all fish can be deflected away the turbines into bypass systems.  Nonetheless, diversion screens have been installed in front of the turbines at all but The Dalles Dam, where experimentation showed that because of the configuration of the dam, screens would be less effective than spilling fish or diverting them through the dam’s ice and trash sluiceway (at The Dalles, juvenile fish passage involves a combination of spill and sluiceway passage, and the result is that about 72 percent pass via spill, 13 percent via the sluiceway, and 14-15 percent go through the turbines). Spillway passage is effective but can expose fish to bubbles of nitrogen in the frothy water immediately below the dams when there are high volumes of spill. Also, fish can be injured as they tumble down the concrete spillways. In either instance, the fish are susceptible to predators below the dams, such as sea gulls, Caspian terns and northern pikeminnow. Barging or trucking (far more fish are barged than trucked) is effective but creates an unnatural environment and an unnatural migration experience for the fish, and some transported fish either lose their homing instinct or fail to return for reasons that are not clearly understood. Research shows that more transported fish survive to the release points below Bonneville Dam than fish that migrate in the river, but that fish that migrate downstream in the river return in greater numbers as adults than transported fish. The “delayed mortality” of transported fish is a subject of ongoing research.

The first fish-barging experiment took place in 1955 when, on April 19, the Washington Department of Fisheries put 200,000 Chinook salmon in a barge at the mouth of the Klickitat River and sent them downstream through Bonneville Dam to a release site near Skamokawa, Washington. “The fish at that point had enjoyed 165 miles of predator-free migration over normal water route, and anticipatable Bonneville mortalities had been wholly eliminated,” wrote researcher C.H. Ellis in the March 1956 edition of the Department’s publication, Fisheries Research Papers.

Barging the fish in 1955 was part of a fish-marking and planting study to assess the impact of Bonneville Dam turbines and squawfish (now known as northern pikeminnow) predation on migrating juvenile salmon. In all, 1 million fish from the Klickitat Hatchery, located near Glendale, Washington, 40 miles upriver from the mouth of the Klickitat River, were divided into five equal lots and released at different locations. Each lot was marked in a way that would identify its migration route. One lot was released at the hatchery; another was trucked to the mouth of the river and put into the barge, which consisted of floating net pens pulled by a boat; another was released at the mouth of the river; the fourth was trucked to the barge release site near Skamokawa; and the fifth was released a short distance upstream from Skamokawa. “Thus, by the evening of April 21, 1955, as diverse a set of travel and river survival tests as could be practically designed had been put into effect,” Ellis wrote. “A means of comparison had been established on the merits of barge vs. truck transport. In addition, the comparative diluting of homing instinct of Columbia River fall Chinook eventually could be measured between the barge lot liberated below the mouth of the Elochoman River [near Cathlamet] and the group allowed to swim the 205 miles from the Klickitat Hatchery.”

Why experiment with transporting juvenile salmon? Because fish were dying at hydroelectric dams, and the state wanted to know what was the safest migration route — in the river, in trucks, or in barges.

“Losses of young migrant salmon through the direct effects of hydroelectric dams and natural predation have become especially critical in the Columbia River Watershed with the ascendancy of power and other water-use developments,” Ellis wrote.  “These dams also have created, particularly in recent years, conditions ideal for fish that prey on migratory salmon.”

Predation by northern pikeminnow remains a problem today, and river conditions have changed dramatically since 1955. There were only five dams on the mainstem Columbia River in 1955; today there are eleven, and the last of these was completed in 1975. There were no dams on the lower Snake River mainstem in 1955, but construction began at Brownlee Dam that year. Today, there are seven — four federal dams between the mouth of the river and the Lewiston/Clarkston area, and three, including Brownlee, in the Idaho Power Company’s Hells Canyon complex.

With a hopeful sendoff in 1955, the Washington researchers waited three years — the first year most salmon return to spawn — for the first fish to return to the Klickitat Hatchery.

“The returns were lousy,” said retired biologist Wes Ebel in a 1999 interview. Ebel, whose research on Columbia River salmon for the National Marine Fisheries Service spanned more than 25 years, said he discussed the early barging efforts with the Washington researchers. “There were no baffles in the net pens, and so a lot of the fish were impinged on the nets — a lot of them died before they were released. That's why the returns were lousy.”

While the Corps of Engineers financed many fish migration and passage experiments and research projects at the Snake River dams, transportation did not get another try until 1968, when the Corps funded an experiment by the National Marine Fisheries Service to collect juvenile salmon and steelhead at Ice Harbor Dam and transport them downriver in tank trucks to below Bonneville, where they were released. In that year, 83,315 Chinook salmon (and no steelhead) were collected and transported. The experiment continued in 1969 (28,311 Chinook and 20,430 steelhead) and in 1970 (20,332 Chinook and 52,217 steelhead). The experiment continued at Little Goose Dam when it was completed in 1971 and at Lower Granite Dam when it was completed in 1975. Reports indicated survival of the trucked fish to the release point below Bonneville was 20 times higher than for those that migrated downstream in the river. In 1977, in response to one of the lowest Columbia River runoffs on record, the Corps met with fish and wildlife agencies and electric utilities concerned about the impacts of the drought on fish and hydropower, and decided to greatly expand the fish-transportation program. In that year, the Corps began transporting fish downriver in barges. The same year, the Corps even tried flying fish down the river, dropping them from a low-flying airplane below Bonneville Dam. The “flying fish” experiment did not work well, and it was not repeated in later years.

The barges used in 1977 were different from those used by the state of Washington in its 1955 experiment. That barge was 55 feet long and 21 feet wide with a draft of five feet. It wasn’t really a barge as much as it was a series of floating net pens. The Corps barges are 180 feet long, 42 feet wide and have a draft of eight feet. They have solid steel hulls.

The number of fish barged by the Corps grew steadily over the years, eventually to 20 million fish per year or more. Research indicates a mixed degree of success. Some stocks did well, and others did not. Barging appears to work best for steelhead and spring Chinook, which spend a year in their birth habitat before migrating to the ocean, and less well for fall Chinook, which begin their migration within a few months of their birth. The effectiveness of barging, then, may have something to do with length of time in the birth habitat and size of the fish. 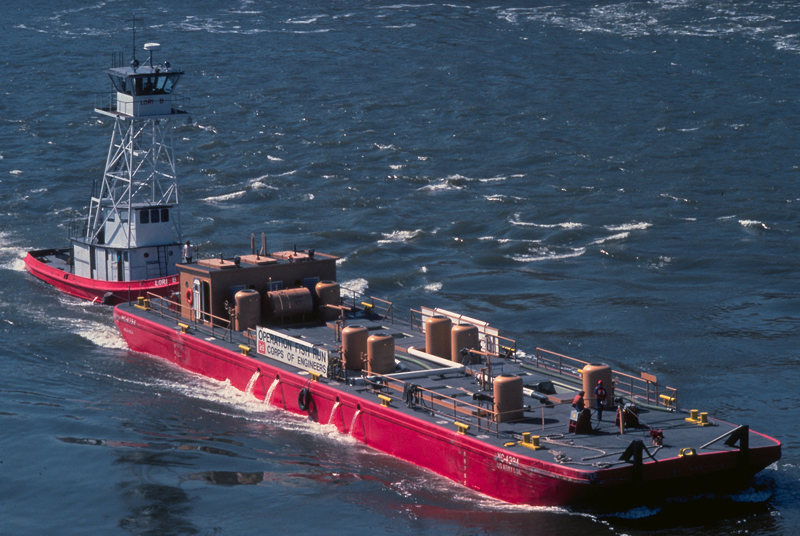