The signature fish of the Columbia River, salmon and steelhead, have specific habitat requirements, including clean, cool water; suitable instream conditions for incubation and rearing; and an ample supply of food. Streamside vegetation supplies important shade to cool the water and attract insects. Salmon and steelhead cannot survive long periods in water that is warmer than 68 degrees Fahrenheit (20 degrees Celsius).

The quantity and quality of salmon and steelhead habitat in the Columbia River basin have changed dramatically since 1850, when the influx of Europeans and Euro-Americans, and their associated economic activities such as logging, mining, grazing, irrigation and development of urban areas began to alter habitat and reduce fish populations. It is estimated that prior to 1850 more than 163,000 square miles of habitat were available to salmon and steelhead in the Columbia River Basin. This represented 14,666 stream miles — 11,741 miles above Bonneville Dam and 2,925 miles below it. By 1930, the impacts of mining and logging, and the depletion of streams by irrigation diversions, had reduced the best habitat for spring and summer Chinook salmon, and steelhead, particularly in the headwaters of tributaries, by half.

Logging removed tree stumps, trunks and branches from stream corridors — these are important to ecosystem processes — and contributed to erosion and sedimentation of spawning areas. Lower Columbia River tributaries, particularly, were heavily logged in the early 20th century. Mining disturbs the soil, contributes to erosion and can result in discharges of toxic waste products into streams. Placer mining, in which the machinery often was large enough to dredge, sift and spew out entire river channels, bank to bank, was particularly devastating to salmon and steelhead habitat. Livestock grazing can damage streambank vegetation and contribute fecal contamination to water. Irrigation can alter the hydrology of streams and contribute to erosion and sedimentation; unscreened irrigation diversions can sweep juvenile fish into fields and ditches where they will die. Urban development can alter stream channels and contribute chemical and fecal pollution to water. These industries and activities began developing rapidly in Columbia River Basin in the 1860s and were major factors in the regional economy by 1925.

Dams on Columbia River tributaries also took a toll on salmon and steelhead, primarily by blocking access to habitat but also by killing fish in hydropower turbines and water diversions. Beginning with the completion of Rock Island Dam in 1933, the quality and abundance of mainstem Columbia River spawning and rearing habitat, which is important for fall Chinook salmon, declined. Tributary habitat also was affected by dams. In the Willamette River Basin above Willamette Falls, for example, dams built just since 1950 have blocked 250 miles of streams and associated habitat. In 1976, the Pacific Northwest Regional Commission estimated that only 72,800 square miles of the basin, or about 10,073 miles of stream, remained available to salmon and steelhead, 7,582 miles above Bonneville and 2,491 miles below it. This amounts to a 31 percent decrease from the pre-1850 era. Dams also caused altered water temperature regimes in reservoirs, reduced the natural turbidity of rivers and streams by slowing flows (this reduced the distribution of nutrients and made it more difficult for fish to hide from predators, whose numbers also increased in the altered stream conditions) and made migration more difficult for juvenile fish, who use more of their energy reserves to swim through slackwater reservoirs than through free-flowing rivers.

Water quality also deteriorated over time as industries released waste products ranging from sawdust to sewage into fish-bearing streams. Some rivers, the Willamette, for example, became so polluted that salmon would not migrate up them. In recent years, the state of Oregon has joined with municipalities along that river to clean it up, and water quality generally has improved. Other important salmon and steelhead rivers, such as the Yakima in Washington and the Umatilla in Oregon, also were impacted by industrial and agricultural development and pollution, but water-quality and habitat improvement projects are having an effect.

In 1996, a scientific panel of the National Research Council of the National Academy of Sciences reported on salmon and society in the Pacific Northwest and concluded that freshwater habitats are critically important to salmon because they constitute the nurseries where the genetic makeup of fish populations is determined. According to the report, “Many human activities — notably forestry, agriculture and grazing, hydropower, and commercial, residential and recreational development — have contributed to degradation of the riverine and adjacent riparian and near-river habitat and caused loss of habitat of spawning adults and young salmon, and loss of associated components of the ecosystem.” The panel recommended increased protection for riverine ecosystems and biophysical watershed processes that support salmon and steelhead populations.

Habitat destruction continues, despite laws and regulations that attempt to stop it. In Idaho, Oregon and Washington, law enforcement officers are assigned to patrol habitat where threatened and endangered species of salmon and steelhead spawn and rear. From time to time, those who abuse fish habitat are caught and fined, but the penalties are minimal. The abuses, however, can be spectacular: In the Wenatchee National Forest of Washington, 20-yard side-dump railroad cars full of dirt and rock being tipped one after the other from a bridge over Icicle Creek, wiping out the habitat, and any salmon and steelhead eggs that were in the river, downstream for a distance of two miles; in East Birch Creek, a Umatilla River tributary in Oregon known for its steelhead population, a rancher using a tractor to illegally recontour both sides of the stream, ostensibly to protect against future flooding but in the process wiping out 200 years of riparian trees and vegetation (an investigating officer measured the water temperature at 104 degrees Fahrenheit — 39.6 degrees Celsius).

Salmon and steelhead are resilient, but not indestructible. Tens of millions of dollars are spent every year on habitat restoration in the Columbia River Basin, and while much habitat has been restored the effort sometimes is an uphill struggle against public indifference to the environmental needs of fish. Angus Duncan of Portland, a former chairman of the Northwest Power and Conservation Council, which prepares a Columbia River Basin Fish and Wildlife Program to mitigate the impacts of hydropower dams on fish and wildlife, captures this sense of benign misunderstanding in a story about an encounter with a rancher in northeastern Oregon. The rancher told Duncan that he was not opposed to habitat restoration, per se, but he was concerned about the extent of work that would have to be done to rehabilitate a stream on his property, a tributary of the Grand Ronde River, in order to bring the average water temperature to 68 degrees Fahrenheit and, over time, improve spawning conditions for salmon and steelhead. He wondered whether there couldn’t be a compromise at 72 degrees. Duncan explained there can be no compromise with threshold survival conditions such as maximum temperatures.

Salmon and steelhead recovery is tied directly to improvements in habitat condition. In Oregon’s Umatilla River, for example, an innovative water exchange program matches irrigation withdrawals with the result that salmon are back in a river that had been dewatered in its lower reaches at times for more than 60 years. Today salmon migrate through downtown Pendleton on their way upriver to spawn. Improving habitat without excluding economic activities is a difficult challenge, but one that must be met. Increasingly, it is being met, if sometimes with difficulty, in the places where fish and humans coexist.

The Council’s fish and wildlife program relies heavily on protection of, and improvements to, inland habitat as the most effective means of restoring and sustaining fish and wildlife populations. However, the program also recognizes that depending on the condition of the habitat and the target species, certain categories of mitigation investments are likely to be more effective than others. Thus, an important function of the Council’s habitat strategy is to direct investments to their most productive applications.

For example, passage through the hydrosystem causes injury to spring Chinook. While measures at the dams can and should be taken to reduce this injury, as long as the dams exist they will continue to cause some of this injury. As an offset, the program may call for improvements in spawning and rearing habitats in tributaries where there are no dams present. By restoring these habitats, which were not damaged by the hydrosystem, the program helps compensate for the existence of the hydrosystem. One such effort to preserve and restore habitat is under way in the Klickitat River, an undammed tributary that runs from Mount Adams south to the Columbia in Southern Washington. The Yakama Nation is using an integrated hatchery program, combined with habitat improvements, to increase production of salmon and steelhead. More information is at the website of the Yakima/Klickitat Fisheries Project. 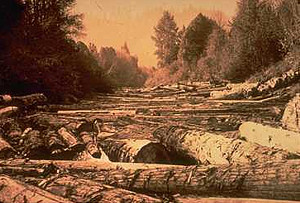 Early logging practices took a toll on fish spawning habitat. Here, logs impounded behind a splash dam await the explosion of the dam that will send the logs sluicing downstream to the main river, destroying riverine habitat along the way. Photo: Streamnet.