The largest salmon ever caught in the Columbia River were summer Chinook destined for tributaries in the interior and upper Columbia River Basin, primarily in Washington and British Columbia. The fish began arriving in the upper mainstem Columbia and its tributaries in June, and because of the size of the fish they came to be known as “June hogs.” Fish three to four feet in length and weighing more than 60 pounds were common.

Angus McDonald, who was in charge of the Hudson's Bay Company post at Fort Colville, just downstream from Kettle Falls, from 1852 to 1872, wrote: “Salmon as heavy as one hundred pounds have been caught in those falls.” The Spokane Spokesman-Review newspaper reported on Sept. 21, 1900, that two Chinook salmon were caught at the mouth of the Little Spokane River, one weighing 50 pounds and the other 52 pounds. The Upper Columbia United Tribes’ Fisheries Center at Eastern Washington University has a photo of a four-foot-long, 64-pound salmon caught in the Spokane River in the spring of 1937, and a transcript of an interview with a woman whose husband caught the fish. The woman, Christine LeBrett, reported that the salmon runs stopped in 1939, which is one year after the construction of Grand Coulee Dam blocked passage of anadromous fish.

The big fish spawned in British Columbia, too. In October 1910, under the heading “Nelson News of the Day,” the Nelson Daily News reported:

“A beautiful salmon was landed at the pool, Slocan Junction, yesterday by Robert Elliott, weighing exactly 50 pounds. The fish was caught on rod and line, with a rather small spoon, and was landed after a fight of an hour and twenty minutes. Its length is four feet two inches. It will be on display this morning in the window of the Nelson Hardware company, with whose tackle it was caught.”

The pool on the Kootenay was about a mile upstream from the point — Slocan Junction — where the Slocan River flows into the Kootenay River about half way between Nelson and Castlegar. 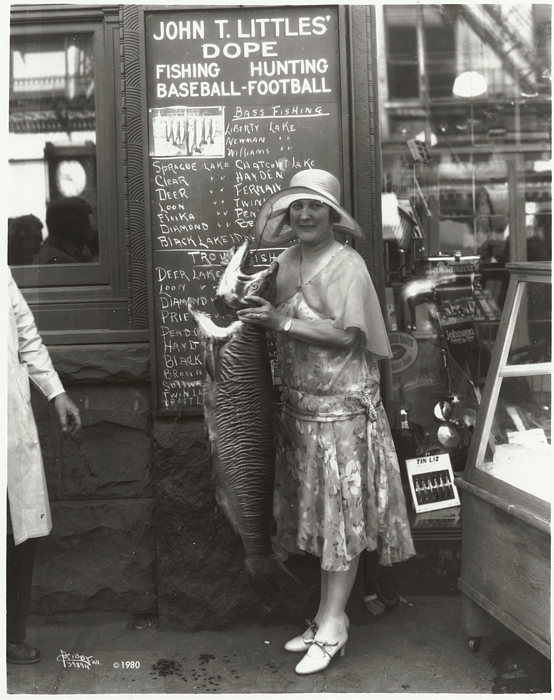 An unidentified woman poses with a 45-pound coho salmon at the J.T. Little store in Spokane on July 23, 1929. The photo appeared in the Spokane Chronicle newspaper. Photo: L87-1.39894-29, Northwest Museum of Arts & Culture, Spokane.