Maryhill is the name of a small community and a museum located on the Washington shore of the Columbia River about 100 miles east of the Vancouver/Portland area. Both were the work of visionary road builder and entrepreneur Sam Hill, who had grand plans for the Columbia River Gorge. With engineer Samuel Lancaster, Hill designed and built the Columbia River Highway that linked Portland with The Dalles, Oregon, a short distance downstream on the opposite shore of the river from Maryhill, in the early 20th century.

Hill planned the community of Maryhill, named for his daughter and wife and located near the town of Columbus, Washington, as an agricultural paradise “where the rain and sunshine meet,” as he liked to say. It was 1909. Hill was a prominent Seattle businessman who also worked for his father in law, James J. Hill, the “Empire Builder” of Great Northern Railroad fame. The Spokane, Portland & Seattle Railway, a Great Northern subsidiary, was under construction through the Gorge, and that probably is how Sam became aware of the area. He knew that several farms in the area were quite productive, and that the prosperous apple-growing district around Hood River, Oregon, was a short distance downstream. Also, good timber was available a short distance north of Columbus. If the SP&S built a station, and if settlers flocked to Maryhill to farm and build houses in his little city, well, the rest would be history.

The prosperity, however, didn’t happen. Hill imagined that the warm and sunny conditions east of the Cascade Mountains and the rainfall west of the mountains somehow would meet in the Maryhill area and provide ideal growing conditions. In fact, the area is in the rain shadow of the mountains and receives about 11 inches of rain per year. Just 30 miles west, at the Hood River district Hill so admired, precipitation is nearly double — such is the nature of the rain shadow. Also unlike the productive Hood River valley, the soil at Maryhill was good for crops only near the Columbia; the soil quickly became thin and rocky away from the river, the legacy of repeated catastrophic floods at the end of the last ice age. And there is near-constant wind; summers are hot and dry, and winters cold and harsh.

Nonetheless, the railroad stopped there and Hill succeeded in attracting a few new farmers to the area, and he established a ferry crossing at Maryhill. While the farms produced some notably good tree fruits, the production never was large-scale, and by 1914 Sam’s grand plans for a community of paved roads, new homes and surrounding productive agricultural fields had failed. He blamed the state of Washington largely, as he believed the lack of a state highway along the north shore of the river was a fatal blow to his community. But in reality, he simply chose a bad location. The ferry service wasn’t a great success, either. The service from Maryhill to Biggs, Oregon, began on Feb. 23, 1915, but did not last long. Like Maryhill itself, the ferry service was poorly located. The boat rolled hard in the frequently strong winds of the Gorge. It was a sidewheeler, and so with one side partially out of the water on windy crossings the other side overworked to keep the boat moving. During low water the ferry hit bottom on a mid-river gravel bar, and during high water the clearance below the Union Pacific Railroad bridge on the Oregon shore was too low for the boat.

In 1914 Hill started construction of his grand home on a bluff overlooking the river three miles west of the Maryhill community. The site is on the western edge of his 7,000-acre ranch. It was not completed in his lifetime. Planned as his “ranch house,” he never lived there and his, wife, for whom it is at least partly named, never saw it.

Maryhill the ranch house has been called absurdly grand and absurdly located. Hill was proud of it, though, and he commented once that he expected it to be standing a thousand years after he died, and it might be. Like the home he built on Queen Anne Hill in Seattle, Maryhill is built of thick concrete reinforced with steel. No wood was used in its construction. The structure is rectangular, with the long ends facing east and west. Long ramps lead up to the main floor on these ends, making the entire structure some 400 feet long. These were to permit guests arriving by car to literally drive into one side of the home, drop off passengers, and then exit the other side. The building itself is three stories tall, 60 by 93 feet, and 50 feet tall.

Hill told author Fred Lockley in 1915 that he chose the site for its scenic beauty and that he planned only “a good, comfortable and substantial farmhouse.” Probably he intended it to complement the Maryhill, and probably he envisioned lavish parties there. He did enjoy entertaining people.

Hill did not apply his usual frenetic energy to construction of Maryhill. He was preoccupied at the time with construction of the Gorge highway, and he was experiencing some financial difficulties with his Home Telephone Company in Portland. But in 1919 he sold the company to Bell, and his fortune improved. His plans for Maryhill were changing. That same year he reportedly offered it to the Belgian government — Sam was frequent international traveler — as a colonial outpost and a place to honor Belgium’s defense against a German invasion in 1914. If the offer actually was made, it was declined. By then he had decided, at the suggestion of his friend Loie Fuller, a dancer and artist of international fame, to make Maryhill a museum rather than a home. The museum was incorporated in 1923. Another of his friends, Queen Marie of Romania, dedicated the unfinished hulk of a building in November 1926 in a lavish ceremony. Time magazine, writing about the event, called Maryhill “Castle Nowhere,” and Hill its “prince.”

Meanwhile, some of Hill’s wealthy and influential friends, including Loie Fuller and Alma Spreckles, she of the sugar fortune, were working to secure art for his museum. These included sculptures by Auguste Rodin, a friend of both women. Fuller died in 1928 and Hill in 1931, but their legacy lives on in the work of Spreckles and others who contributed money and art to the museum, which eventually was finished (Time, reporting on Maryhill again, called it “the world’s most isolated art museum.”). It opened to the public on May 13, 1940, Hill’s birthday, and remains in operation to this day. 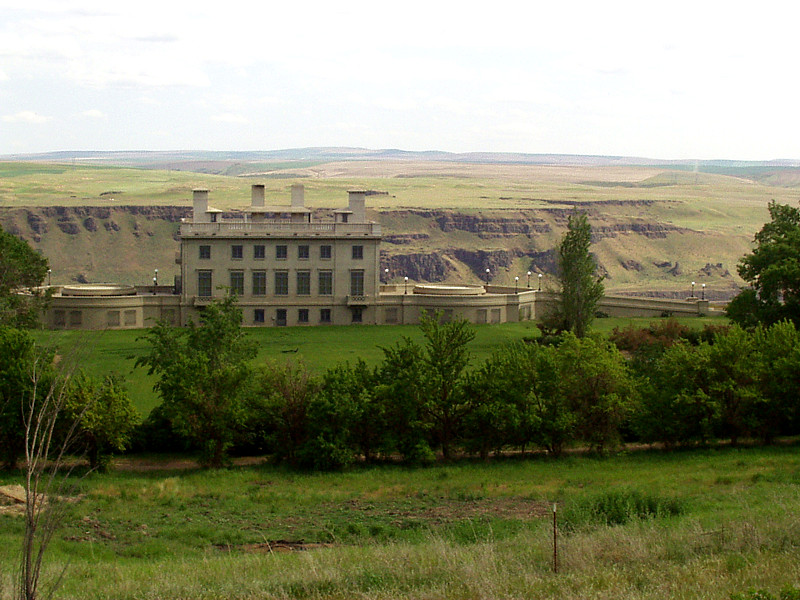 The Maryhill Museum sits on a bluff on the Washington side of the Columbia River, east of The Dalles, Oregon and Wishram, Washington.