The rural electrification program proved popular and, in 1936, Congress established a 10-year loan program for utilities to extend power lines to rural customers, but many existing utilities remained reluctant to do so because of the cost — it was more expensive per customer to build and maintain lines to rural customers than to those who lived in cities and towns. In response to the utilities’ reluctance, electric cooperatives formed to take advantage of the loan program.

In the Northwest, the concepts of electrification provided by rural customer cooperatives wasn’t new. Electric cooperatives had been formed as early as 1914. Bonneville and Grand Coulee dams were built largely to help electrify rural areas of the Northwest, where rural residents were hungry for power. By 1940, thanks largely to the establishment of the REA, the completion of Bonneville Dam in 1938, and the creation of rural electric utilities, 59 percent of the farms in Oregon had electricity; in Washington, the figure was 71 percent. The same thing happened in the other states.

During World War II, a shortage of materials forced a halt to construction of rural electric lines, but after the war construction boomed as poles and wires became available. Also, in the 1944 Pace Act, Congress reduced the interest rate on REA loans to 2 percent and extended the payoff period to 35 years. In the five years following World War II, more than 2 million consumers took advantage of the loans and connected to rural electricity systems.

By the early 1970s nearly all farms in the United States had electricity. The REA was abolished in 1994; its functions were assumed by the Rural Utilities Service, which today is part of USDA Rural Development, a division of the U.S. Department of Agriculture. 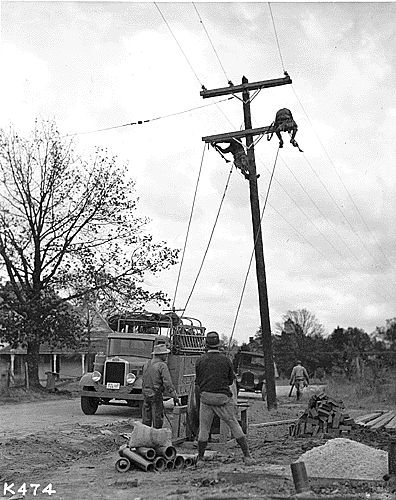