In 1807, 15 years after the American fur trader Robert Gray discovered the Columbia River by sailing across its bar and into its estuary, Canadian fur trader David Thompson discovered the source of the river 1,214 river miles away in southeastern British Columbia. He thought it was the river discovered by his countryman Alexander MacKenzie in 1793, today known as the Fraser. That is because Thompson found himself on a large river flowing north. If this were the Columbia, he reasoned, it should be flowing south toward the Pacific.  He knew about Gray’s discovery of the mouth of the river, and he was aware of the Lewis and Clark expedition, which entered the Columbia from the Snake River in October 1805, about two years earlier.

Reaching the river had been difficult. Thompson was in charge of the North West Company’s Rocky Mountain House on the North Fork Saskatchewan River, on the eastern slope of the Rocky Mountains northwest of present-day Calgary, Alberta. In 1806, Thompson dispatched an employee, Jaco Finley, to establish a horse trail over the Continental Divide from present-day Alberta to British Columbia. The divide Finley used later was named Howse Pass. The trail followed Blaeberry Creek to the Columbia.

Thompson crossed the divide on June 24, 1807, and reached the large, north-flowing river on June 30. After taking latitudinal observations, Thompson knew it was a different river than the one Mackenzie had described.

Thompson named his river the Kootenae, after a local Indian tribe, not knowing the river was the true Columbia. He followed it south, upriver, and soon reached the area of the two headwaters lakes. There, in August 1807, Thompson built a post and named it Kootanae (or Kootenai) House. The location was about one mile north of the present-day town of Athalmer, where the Columbia leaves Lake Windermere flowing north, a quarter mile north of the mouth of Toby Creek. As far as anyone knows today, it was the first trading post, as opposed to a military fort, built by Europeans or Americans on the Columbia River.

The headwaters of the Columbia, Thompson wrote, were 268 miles from Rocky Mountain House in a valley of particular beauty:

“I could never pass this singular place without admiring its situation, and romantic bold scenery . . . other Rivers have their sources so ramified in Rills and Brooks that it is not easy to determine the parent stream, this is not the case with the Columbia River, near the foot of a steep secondary mountain, surrounded by a fine grassy Plain, lies its source, in a fine Lake of about eleven square miles of area, from which issues its wild rapid Stream; yet navigable to the sea, its descent is great.”

Despite his expertise as a geographer and surveyor, Thompson nonetheless wildly miscalculated the elevation of Columbia Lake, which he stated as 5,960 feet. The actual elevation is about 2,656 feet. Regardless, he knew it was a route to the Pacific, as he observed spawning salmon in the lake and also in Windermere Lake. Thompson noted that his clerk, Finan McDonald, liked to spear salmon at night, attracting them with a torch.

“At length, the Salmon made their appearance, and for about three weeks we lived on them. At first they were in tolerable condition, although they had come upwards of twelve hundred miles from the sea, and several weighed twenty five pounds. But as the spawning went on upon a gravel bank a short distance above, they became poor and not edible. We preferred horse meat.”

In early May 1808, Thompson crossed the short plain southeast of the Columbia headwaters and entered another river, which flows south. Its headwaters are in the canyond and mountain valleys to the east of Columbia Lake.  Thompson called this McGillivray’s River after the Northwest Company’s chief operating officer in Montreal. It is the modern Kootenay (Canadian spelling). The river flows south into Montana (in America it is spelled Kootenai) and then west and north through Idaho and back into Canada, where it empties into the Columbia.

In August, upon his return to Kootanae House, Thompson learned from some local Indians (they were Flat Bows, who lived south and west of the Columbia headwaters and had never seen white men until they came to Kootenae House to trade) that “. . .from this House to the Sea & back again was only the Voyage of a Summer Moon.”

At Thompson’s direction, Finan McDonald later built a temporary post near Kootenai Falls and present-day Libby, Montana. In September 1809, Thompson established a trading post on the Clark Fork River, which he may have learned about from the first published account of the Lewis and Clark expedition, which was the journal of expedition member Patrick Gass. His journal, published in Philadelphia in 1807, described the Clark Fork River and the lake it flows into, Lake Pend Oreille. This post, which Thompson named Kullyspel House, was located near the mouth of the river at a place later named Sheepherders Point on the north shore of the lake, near Memaloose Island. At Kullyspel House, the men supplemented their diet with trout. In November, Thompson established a second post on the Clark Fork, this one called Saleesh House. It was about 40 miles upstream near present-day Thompson Falls, Montana.

The North West Company decided, in 1809, not to explore the Columbia further but to concentrate its fur-trading at the Kullyspel and Saleesh posts. The company found the Indians friendlier along the Pend Oreille and Clark Fork Rivers than in the upper Columbia and Kootenai(y) drainages, where the aggressive Piegans often came raiding west across the Continental Divide. Thompson already had decided to abandon Kootenae House, his original post near the Columbia headwaters, and concentrate on the more populated area to the south. But the company’s decision to emphasize business over exploration meant he would have to fit any further explorations into his trading duties. In this, the company missed an important opportunity. Thompson knew, probably from Gass’s journal, that Lewis and Clark had decided the outlet river from Lake Pend Oreille, the Pend Oreille River, was not navigable because of waterfalls and the narrow canyon. Lewis and Clark based their assumption on information from local Indians.

In 1810, Thompson decided to find out. He traveled down the Pend Oreille until he decided it was truly not navigable. Ironically, he was about half a day from the mouth of the river, where it flows into the Columbia immediately north of the present-day international border. Historian Bernard DeVoto says this discovery would have been immensely important to the company, but it did not happen.

Obviously, though, Thompson wanted to extend the company’s business to the southwest and the Columbia. Spokane Indians had been traveling more than 100 miles to trade at Kullyspel House. So that same year, 1810, Thompson dispatched two of his employees, Jaco (Jacques Raphael) Finley and Finen McDonald to build a trading post among the Spokanes. The new post, called Spokane House, was located on the Spokane River about a half mile upstream from the confluence of the Little Spokane.

Meanwhile, New York merchant John Jacob Astor also had designs on the Columbia River trade, a fact known to the North West Company. In November 1810, Simon McGilivray, the North West Company’s London agent, wrote to British Prime Minister Liverpool to warn him that Astor had sent two exploratory expeditions, one by land and the other by sea, to establish a trading post at the mouth of the Columbia. McGilivray wrote: “I have now to inform your Lordship that the American expedition to the Columbia River has actually sailed from New York, and consequently I fear it may almost be too late . . . to establish Settlements on the Columbia River, and so to secure the right of Possession to Great Britain before the arrival of the Americans.”

That got the Canadians moving. By now, Thompson was in charge of the company’s Columbia Department. His well-worn trail from Rocky Mountain House over the divide to the Columbia and south to the Clark Fork posts had attracted the attention of Piegan Indians on the east side of the Rockies. They threatened the fur traders with reprisals for selling guns to their adversaries across the Continental Divide, the Flatheads and Kootenaes.

The company needed a safer route over the Rockies, and Thompson found it about a hundred miles north. Thompson’s new route went north from Rocky Mountain House up the Athabasca River, over the Continental Divide and down the Whirlpool and Canoe rivers to the Columbia at a place south of present-day Valemount, British Columbia. Thompson named the place Boat Encampment.

In 1811, Thompson became the first European to travel the length of the Columbia, although not completely on the river. Beginning at Boat Encampment, Thompson went south — upriver on the Columbia — past the site of his first post, Kootenae House, and then down the familiar trail to the company’s posts on the Clark Fork and Spokane rivers. From Spokane House, he followed an Indian trail north to the confluence of the Colville and Columbia rivers, where he arrived on June 19. A short distance north, at a falls he named Ilthkoyape and known later as Kettle Falls, he observed Indians fishing for salmon.

Thompson left for Astoria on July 3, noting in his diary: “We set off on a voyage down the Columbia River to explore this river in order to open out a passage for the interior trade with the Pacific Ocean.”

On July 10, near the mouth of the John Day River, a Columbia tributary in present-day Oregon, Thompson watched as local Indians fished with both seine nets and nets mounted on long poles. The next day, he saw seals in the river below the Long Narrows and Celilo Falls. His party fired a few shots at the seals but missed.

Two days later the party camped near present-day Vancouver, Washington, where local Indians told him about the five varieties of salmon that were found in the Columbia. The party arrived at the Astor company’s fort on July 15, a Monday. Thompson wrote in his Narrative:  “At 1 P.M. thank God for our safe arrival, we came to the house of Mr. Astor’s Company — Mssrs. McDugall, Stuart & Stuart — who received me in the most polite manner, and here we hope to stay a few days to refresh ourselves.”

In early August, returning up the Columbia with some of the Astor company men, Thompson measured a Chinook salmon at four feet, four inches long and more than two feet in circumference. They ate it.

Thompson was back at the Canoe River, and his Boat Encampment, on September 18. Thompson biographer Jack Nisbet writes that Thompson proved the Columbia ran from the mountains to the ocean and that a Northwest passage did exist, if not by water the entire way. Thompson’s Northwest passage was his trail over the Rockies to the Columbia. It would serve the Canadian fur trade into the middle of the 19th century. 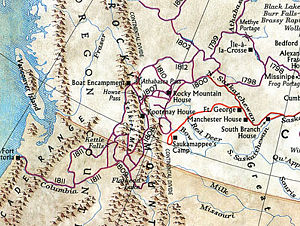