In 1792, Great Britain became the first European nation to explore Puget Sound when an expedition under the command of Capt. George Vancouver entered from the Strait of Juan de Fuca and spent two months exploring the inland waters.

Vancouver was only 34 years old in 1792, but he was a veteran explorer and familiar with the Northwest, having served as a lieutenant on Capt. James Cook’s third voyage to the Pacific. On that voyage, Cook and his crew became the first Europeans to visit the Hawaiian Islands; they also landed on present-day Vancouver Island — without realizing it was an island.

In April 1792 Vancouver sailed east up the Strait of Juan de Fuca and into Puget Sound, and spring was in its glory. The Cascade Mountains were snowy, the sky was brilliant blue, the deep-green forests came nearly to the water’s edge in places, and the shoreline was studded with scenic small islands. Along the strait, before entering the sound, Vancouver wrote in his official narrative: “I could not possibly believe that any cultivated country had ever been discovered exhibiting so rich a picture. . . .The delightful serenity of the weather greatly aided the beautiful scenery that was now presented; the surface of the seas was perfectly smooth, and the country before us exhibited every thing that bounteous nature could be expected to draw into one point of view.”

On June 4, the birthday of King George III, Britain’s reigning monarch at the time, Vancouver landed near present-day Everett, Washington, and took possession of the whole region, which he named New Georgia. He then sailed north and discovered the inland passage between mainland British Columbia and Vancouver Island, continued around the northern tip of the island and then back south to Nootka Sound to meet with a representative of the Spanish government and conduct another part of the official business of his voyage, which was to reclaim possession of a British trading post at Nootka that had been seized by Spain. As it turned out, Vancouver and the Spanish official, Juan Francisco de la Bodega y Quadra, commander of the Spanish establishment at San Blas on the western coast of Mexico and himself a former Northwest coast explorer, could not agree on the precise meaning of the convention the two countries signed in 1790 to terminate the dispute.

The convention addressed an important issue: could a country claim sovereignty over an entire region simply by declaration, or must sovereignty be confirmed by actual occupation? Spain had claimed exclusive right to the entire Pacific by virtue of its posts at San Blas, San Francisco and Nootka, and sought, officially, at least, to exclude other nations from trading and settlement. Britain claimed that the Pacific was open to all and that country only could possess land it actually occupied. In the convention, both sides gave a little and, importantly, Spain abandoned the claim of exclusive sovereignty to the entire Pacific coast and Britain agreed to stay out of places where Spain had established trading posts and routes.

Soon, however, Britain would waffle on the concept that a country must occupy a place in order to possess it, this with regard to the Columbia River, but for the moment, Vancouver and Bodega y Quadra agreed to disagree and to jointly share possession of the region. So cordial were their relations that formal dinners were conducted and the two commanders agreed to name the island after themselves: Bodega’s and Vancouver’s Island.

At the Nootka meetings, Bodega y Quadra revealed to Vancouver that an American fur trader, ROBERT GRAY, had beaten Vancouver to the Columbia River and named it — after his ship, as it turned out. That was in May, when Vancouver was exploring Puget Sound and, interestingly, a month before Vancouver landed and claimed possession of the country. After exploring the estuary and the river 36 miles inland, Gray had sailed to Nootka where he gave Bodega y Quadra a sketch of the entrance to the river. It was now October, and Quadra showed the sketch to Vancouver. The previous April, Vancouver, like Gray, had seen the mouth of the Columbia but dismissed it as insignificant and too small an opening for a ship the size of his 340-ton Discovery. Now he left Nootka and sailed to the Columbia, which he still considered too small for his ship to safely enter. Instead, he ordered his lieutenant, William Broughton, who commanded the tender Chatham, a modest 135 tons, to explore the river. Vancouver went on to San Francisco.

Broughton had a rough crossing — he waited a day for the waves to calm a bit — and then entered the estuary and anchored in a bay on the north side. There he found a countryman, James Baker, and his schooner Jenny, trading for furs. Broughton explored the estuary and then, in a longboat, traveled up the river more than 100 miles to a point that probably was near the mouth of the Sandy River, about 10 miles east of present-day Portland. There, on October 30, 1792, he named the point after Vancouver and claimed possession on behalf of Great Britain. Vancouver himself never was on the Columbia. Later, when the United States and Great Britain argued over who discovered the river, Gray on behalf of America or Broughton on behalf of Vancouver and Great Britain, Vancouver argued that Gray may have entered the salt water estuary but Broughton clearly had entered the freshwater river. Thus, possession was Britain’s because Gray never left saltwater. It is an arguable point. Tidal influences — the extent of the estuary — can be detected father upriver than the place where Broughton landed. If the estuary is defined by rising and falling tides, then it might be said that neither Gray nor Broughton ever was in the actual river.

The border dispute lingered for decades, and during that time the Columbia River country steadily filled — with American emigrants. The two countries agreed on a policy of joint possession in 1818, four years after the Treaty of Ghent ended the War of 1812, but the border issue was not settled until 1846 in the Treaty of Oregon.

Vancouver returned to the Northwest coast from California and continued his detailed exploration of his island and the coast, in search of a Northwest Passage, into 1794 and then returned to Britain. His charts of the maze of islands and the complex shoreline geography of the British Columbia coast were so accurate that they were used for more than 100 years.

In poor health, perhaps with tuberculosis, he retired to Petersham, a small town near London, and began writing his journal for publication. It was unfinished when he died, on May 12, 1798. He was 40 years old. 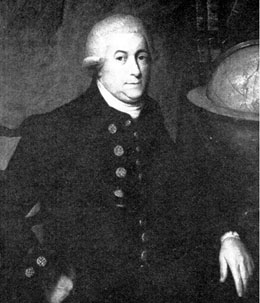