At the request of the Council, the Independent Scientific Advisory Board (ISAB) reviewed and recommended potential alternative metrics for evaluating and comparing the effects of predation at different stages in the life cycle of anadromous salmon and steelhead in the Columbia River Basin. This ISAB review is intended to inform a future technical workgroup charged with developing standardized predation metrics to help determine the effectiveness of predator management actions. Current predator control efforts in the Columbia River Basin intended to benefit salmon and steelhead include lethal removal of northern pikeminnow and northern pike and non-lethal and lethal methods to control avian predators (primarily ringed-bill and California gulls, Caspian terns, and double-crested cormorants) and pinnipeds (primarily California sea lions).

The ISAB's conclusions and recommendations are based on a targeted but not exhaustive literature review and a series of scientific and technical briefings by experts working in the Basin. The ISAB considered three types of alternative metrics: two are used to evaluate short-term effects of predation on salmon, and a third is used to examine long-term effects. The ISAB developed criteria that can be used to informally compare alternative metrics and a hierarchical approach for evaluating their usefulness.

At first glance, developing a metric to evaluate the consequences of predation on salmonid populations might seem straightforward. Predators take individuals from a population and cause a corresponding decline in salmonid abundance. However, it can be misleading to assume that mortality at each life stage accumulates additively over the salmonid life cycle if other factors compensate for this mortality.

The ISAB considers compensatory mortality the most important uncertainty to address when developing a predation metric. Compensatory mortality occurs when predation mortality at one life stage is offset to some degree by decreased mortality at the same or subsequent life stages. For example, a predator might eat injured or weak fish that would have died before reaching adulthood; therefore, controlling this predator would not result in more adult fish. The ISAB reviewed evidence for mechanisms of compensation, including (1) density dependent survival due to factors other than predation, (2) selective predation based on fish size and condition, (3) and switching behavior of predators, which may be caused by a change in abundances of alternative prey species or when secondary predators increase predation on salmon following control of the primary predator. Considerable compensation in predation-related mortality may occur between juvenile and adult life stages, but additional compensation may also occur during the subsequent spawner-to-smolt stage, indicating the need to consider predation within the context of the entire life cycle. Much of this compensation may stem directly from density dependence. For example, loss of 50% of a juvenile salmon population in response to predation or other factors would likely reduce intraspecific competition for resources, potentially leading to increased growth and survival among the survivors.

A review and comparison of three alternative metrics using a standard set of evaluation criteria revealed that a single metric would not be adequate for evaluating all goals.

1. Using and further refining two types of metrics currently in use in the Basin:

2. Adjusting the equivalence-factor metrics and the population growth rate metric (Δλ) to account for assumed or estimated compensation in mortality.

3. Placing predation mortality in the context of a life-cycle model.

The ISAB concludes that individual metrics are useful, but metrics can be more informative when incorporated in a life-cycle model that can help disentangle multiple factors affecting salmon survival and interactions among those factors. Furthermore, such processes and interactions can be evaluated in modeled scenarios and verified with data. This approach could help guide research, monitoring, and evaluation of predation throughout the salmonid life cycle, both to provide the data necessary to parameterize and verify models, and to refine metrics. A significant challenge will be to estimate the degree of compensation associated with predation and predator control actions at different life stages. If estimates of compensation are not available, then assumptions about potential compensation should be considered when evaluating predator effects on salmon and steelhead populations and the benefits of predator control programs. Finally, the ISAB encourages the future workgroup charged with developing a standardized predation metric(s) to fully consider our recommended metrics and also explore additional alternative methods and metrics. 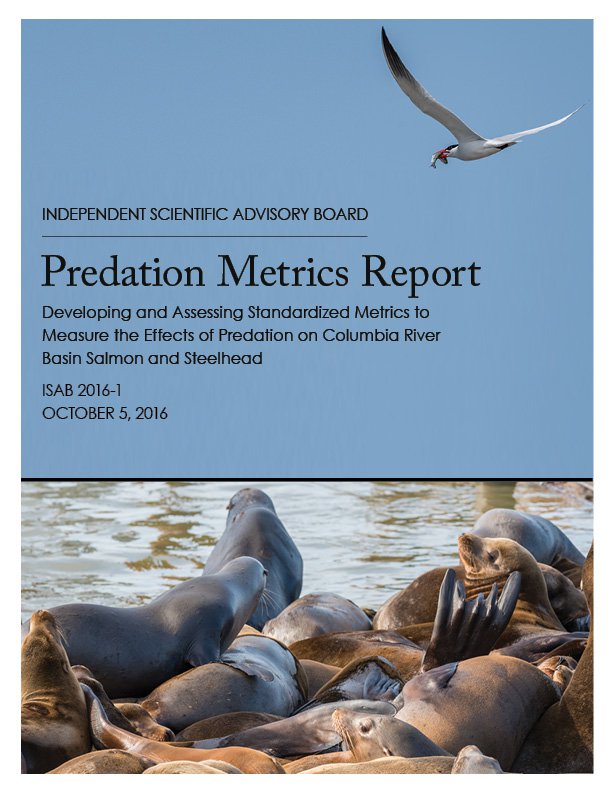