In recent years, fish biologists have gained a better understanding of white sturgeon, the giant, long-lived, bottom-dwelling mystery fish of the Columbia River, but much work remains, experts reported at a sturgeon symposium in Coeur d’Alene in November.

Gather 65 sturgeon experts in a room and pretty soon the talk turns to complex topics such as genetics, reproductive success and failure, carrying capacity (how many fish can exist in the same area), potential effects of climate change, and the benefits and pitfalls of using hatcheries to boost wild sturgeon populations. But a common thread running through the two-day symposium convened by the Northwest Power and Conservation Council, tribes, and state fish and wildlife agencies was that compared to what is known about Columbia River Basin salmon, what is known about sturgeon is far less and varies by population.

For example, White Sturgeon in the Kootenai River, an ESA-listed endangered species, have been studied extensively for more than 25 years, boosted by a hatchery program that uses wild broodstock, and released as juveniles into restored habitat in the river. Conversely, almost nothing is known about sturgeon in the reservoirs behind three of the four federal dams on the lower Snake River other than that the fish are present and that their numbers appear to be declining.

Here is a region-by-region look at what is known about the largest and longest-lived fish species in the Columbia River Basin:

Upper Columbia, between Grand Coulee and Revelstoke dams:  A hatchery program in British Columbia and Washington has been so successful that a fishery downstream in Lake Roosevelt, the reservoir behind Grand Coulee Dam, aims to reduce the number of fish from a particular, and very successful, brood year so as not to dilute the gene pool if those fish spawn with wild sturgeon. Meanwhile, however, it appears there is a persistent “recruitment failure” in this area – wild fish are not producing many juveniles. It’s a problem that’s been evident for some time and that led to the creation of the Upper Columbia White Sturgeon Recovery Initiative in 2002 and subsequently the hatchery program, which began in British Columbia in 2001 and in Washington in 2004. 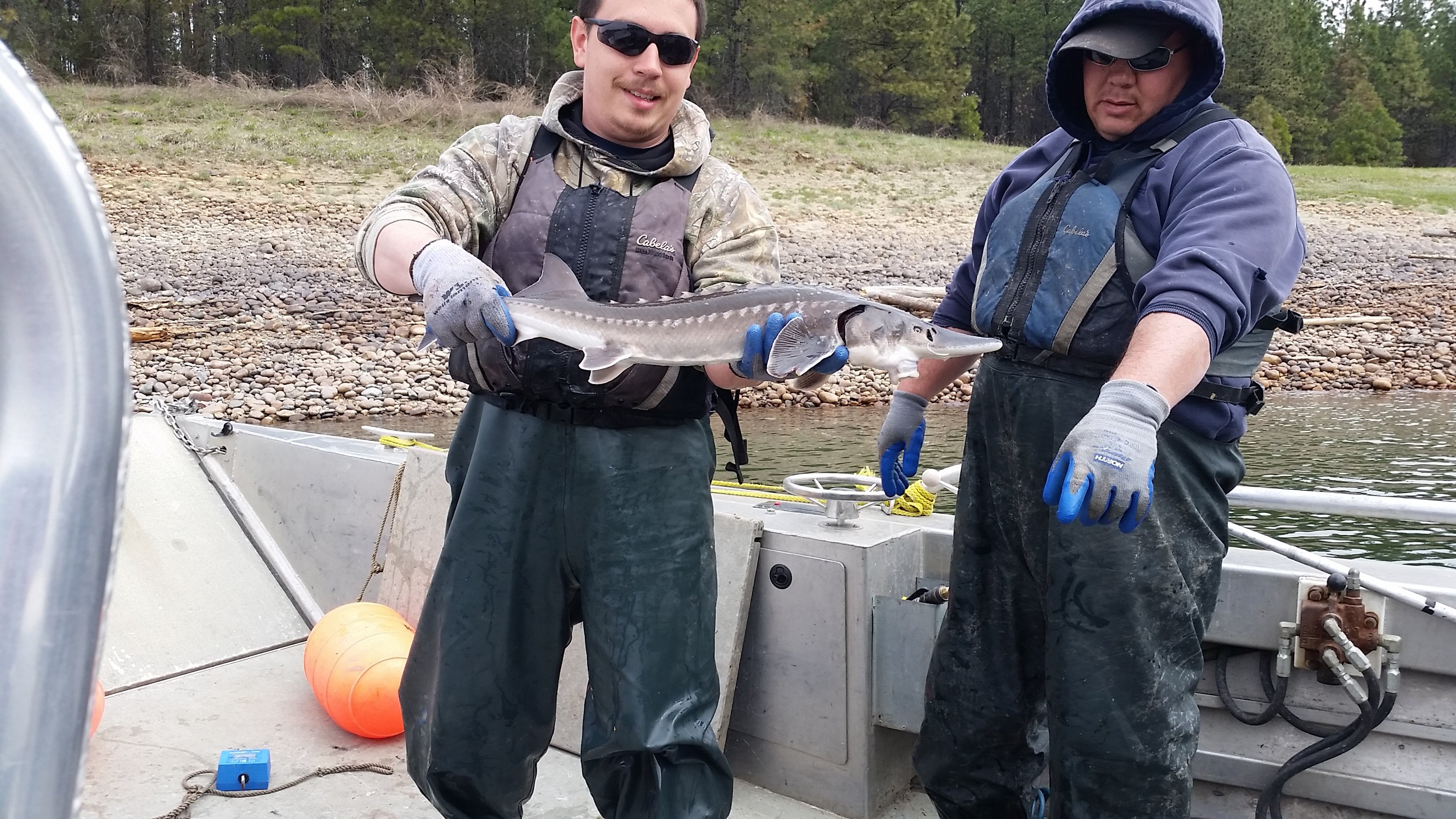 Lower Columbia River, McNary Dam to the ocean: Sturgeon populations, which have not been consistently bolstered with hatchery fish, increase in numbers with every reservoir closer to the estuary – more fish in The Dalles pool than in the John Day Pool, and more fish in the Bonneville pool than in The Dalles pool. But the populations are not numerous enough to allow harvest. The healthiest of these populations is the one between Bonneville Dam and the ocean. Unhindered by dams, these sturgeon can access food in the estuary and may even take a spin in the ocean. On occasion, Columbia River sturgeon are caught (and released) in the Fraser and in Puget Sound.

Middle Columbia, McNary to Chief Joseph dams: In the middle Columbia, a hatchery program with partners including the three mid-Columbia public utility districts (which operate five dams), the Yakama Nation, Washington Department of Fish and Wildlife and others, is having success releasing juvenile sturgeon into the river, but they don’t appear to survive in the anticipated numbers – another mystery. Releasing older, and therefore larger, hatchery fish may help improve survival.

Kootenai River, Kootenay Lake to Libby Dam: Ever since the construction of Libby Dam blocked the river and changed the flow pattern, beginning in 1972, spawning has declined because, it is believed, the high spring runoff flows were important to spawning and they have only occurred infrequently since, either naturally or as the result of prescribed dam operations from a recovery plan for the listed species. Spawning in the wild continues to be low. All hatchery fish are tagged so they can be monitored – there are 85 acoustic receivers – as they move through the river and the lake.

Snake River above Brownlee Dam: Idaho Power Company is using sturgeon raised at a state fish hatchery in Hagerman to boost self-sustaining wild populations in two areas upstream of Brownlee and CJ Strike dams. Assessing the size of the population is difficult, but the company is experimenting with side-scanning radar and acoustic tags in juvenile fish. As in the Kootenai River, wild-fish spawning is influenced by river flows – when the flow is over 25,000 cubic feet per second in the spring, the fish appear to spawn. Less than that is a problem, and if flows drop below 12,000 no spawning has been observed. The program is authorized in the company’s federal licenses for dams it operates on the Snake. Mercury concentrations, particularly in older sturgeon in Hells Canyon, is a concern -- well over the limit for safe consumption by humans. Mercury is an endocrine disruptor that can reduce estradiol, a hormone important for reproduction.

Meanwhile, very little is known about sturgeon populations in the lower Snake River, where there are four federal dams. Only a few population assessments have been done over time. The change in abundance in the reservoirs behind the first three dams – Ice Harbor, Lower Monumental, and Little Goose, is either unknown or has declined substantially in comparison to surveys in the 1990s, according to the Washington Department of Fish and Wildlife.